A Jewish wedding by the sea

Sharon and Jonathan dreamed of a really special wedding, full of sun light, brightness… something different from the indoor weddings that are usually organized in Switzerland, the place where they live. That was the reason why they decided to stay in Marbella to celebrate the most important day of their lives. Their bet could not have been better, since they got married during a beautiful summer day the last July; an unforgettable outdoor ceremony by the sea, exactly as they had dreamed.

The stunning beach club La Cabane in Hotel Los Monteros was the selected place for the wedding. It is certainly one of the best hotels in Marbella and all the details were highly considered in order to create a great event.

The day started when Sharon, her sister and mother had their hair and make up done by the talented Lorraine Romain of Princess Bride.

The bridal bouquet and bridesmaids were done by Pedro Navarro.

In Jewish weddings, one of the most important elements is the Huppah, symbol of the new home created with the marriage. We put a lot of effort into it to make it really special, and Pedro created the beautiful Huppah full of hydrangeas and white roses.

The couple went into the Huppah accompanied by their parents, Jonathan first, and followed by Sharon. The Rabbi officiated a ceremony that hosted very emotional moments such as the rings exchange between bride and groom; and it ended when, following the tradition, the groom broke the wine glass with the right foot.

After the ceremony, a cocktail was served by the pool for two hundred guests who enjoyed at the same time a flamenco show, a real touch of the local culture in a markedly international wedding. Another different element that we added to this wedding was the costumed Photo call, created by Nulki Nulks.

The seating plan, which was designed according to the colors and style of the wedding, was managed by Con B Mayúscula.

Lately, the dinner took place in one of the hotel’s event rooms. In regards to the organization of the tables, we combined some square shaped tables decorated with low flower arrangements, and round shaped tables with high ones, fact that broke a little bit the rigor of the celebration and gave a closer and informal atmosphere to the dinner. All wedding decoration was based on white and mauve hues, also made ​​by Pedro Navarro.

Music plays a very important role in a Jewish wedding, and this one, was not an exception. Version Originale Orchestra, French music group entertained the guests from the beginning of the event, including violin and piano during the ceremony, and then a full band since the beginning of dinner.

The celebration lasted several hours and guests received personalized fans and flip flops as a gift to remember the marriage.

Photographs and video were taken by DePerez.

For us, organizing this wedding was an exciting challenge, as it involved rituals and traditions to which we are not used to. We had always in mind that we needed to learn what were the most important details for the couple and we put a lot of effort for everything to go perfectly.

Now we just hope to have the chance to repeat this experience.

Real is rare but at the same time extraordinary. 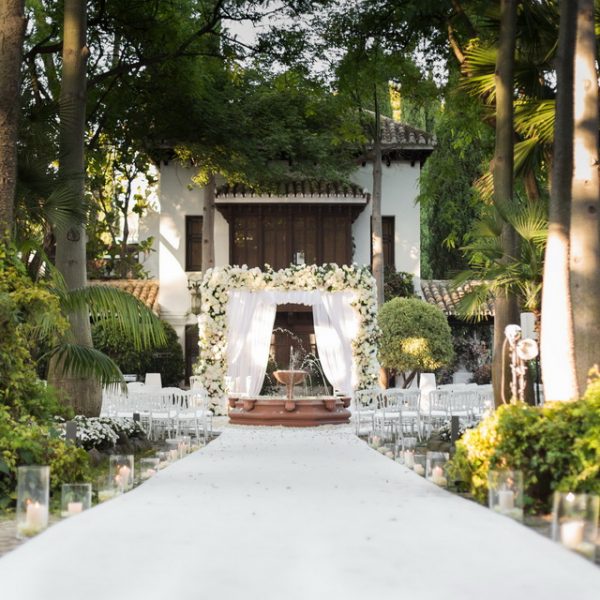